15 Mar / The Self: The Archetype of Wholeness 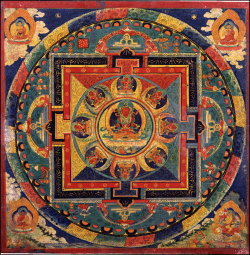 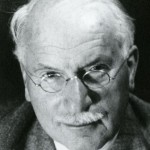 As discussed in a previous blog, the ego consists of the personal center of the psyche, however, C.G. Jung (Figure 1) conjectured the existence of another psychic center, a transpersonal one, which extends far beyond the ego’s sphere of influence. Jung called this transpersonal center the self, which not only is an archetype but simultaneously contains all archetypes. This produces a paradox that cannot be adequately articulated through syllogisms. The idea however seems aptly described via the dictum: “God is an intelligible sphere whose centre is everywhere and whose circumference is nowhere” (St. Bonaventure as cited by Jung, 1956/1963, CW14, para. 41).

Elsewhere, Jung (1928/1953) underscored this paradoxical nature of the self:

I have called this centre the self. Intellectually the self is no more than a psychological concept, a construct that serves to express an unknowable essence which we cannot grasp as such, since by definition it transcends our powers of comprehension. It might equally well be called the “God within us.” The beginnings of our whole psychic life seem to be inextricably rooted in this point, and all our highest and ultimate purposes seem to be striving towards it. This paradox is unavoidable, as always, when we try to define something that lies beyond the bourn of our understanding. (CW7, para. 399)

Thus, the self could be viewed as an organizing principle par excellence that intimates a supraordinate reality beyond the ego. Because the self is an archetype, it can only be partially experienced. For all practical purposes, one can never fully assimilate the self because it has transpsychic origins, or as Jung (1921/1971) wrote:

In so far as psychic totality, consisting of both conscious and unconscious contents, is a postulate, it is a transcendental concept, for it presupposes the existence of unconscious factors on empirical grounds and thus characterizes an entity that can be described only in part but, for the other part, remains at present unknowable and illimitable. (CW6, para. 789) 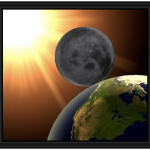 Figure 2. The earth has a geometric relationship with its star, the sun.

Viewed psychologically, the self is the image of wholeness. It constitutes a psychic totality. The personality, afterall, is pluralistic. Although the ego feels as though it is all there is, in actuality the ego is only one psychic complex among many. As a psychologist, Jung conjectured that the psyche contains an a priori imprint of the god-image whose various manifestations (i.e., archetypal images) can be found in the world’s many religious systems.

Edward Edinger (1972/1992), one of the best explicators of Jung’s ideas, wrote that “The Self is the ordering and unifying center of the total psyche (conscious and unconscious) just as the ego is the center of the conscious personality” (p. 3). The ego is subordinate to the self in a way similar to the way the earth is subordinate to the sun (figure 2).In fact, the entire solar system could be viewed as a symbolic parallel to the human personality.

To confuse the ego with the self can have an adverse effect on the personality. Often a situation arises where the naïve ego identifies with the self and becomes inflated. An inflated ego can produce an unrealistic and distorted view of his or her role in the world. People tend to react to such a psychological condition very differently. In some it may result as a power drive that can be described as hubris whereas others will co-opt a fantasy that is best characterized as “the provisional life”—an attitude that is not rooted in the existential realities of the here and now. We have all encountered these kinds of people in varying degrees ranging from the annoying to the pathological; and sometimes even we find ourselves yielding to such an inflated attitude. In this way, consciousness should approach the self cautiously. The bible seems to articulate this point very well: “It is a dreadful thing to fall into the hands of the living God” (Hebrews 10:31).

One need not make any metaphysical assertions here as we are describing an empirical concept that has its grounding in the psyche. It requires only a cursory survey the world’s religions to find numerous analogues of the archetype of wholeness in the form of the god-image. Jung (1951/1956) even wrote that “the self, on account of its empirical peculiarities, proves to be the eidos . . . behind the supreme ideas of unity and totality that are inherent in all monotheistic and monistic systems” (CW9ii, para. 65). 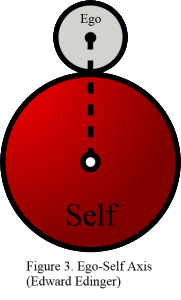 The influence of the self usually becomes most evident during the second half of life after the ego has passed its zenith and begins to set. As a general rule, analytical psychologists accept that while the central purpose of the first half of life is to create a distinct boundary between ego and self, the second half of life requires a devaluation of the ego and a relationship with the self. Edinger called the relationship between the ego and the self at the various stages of life the ego-self axis (Figure 3) (p. 5).

The ego’s approach to the self, and the necessary relationship that gradually forms between the former and the latter, is essential to what Jung called individuation, a core Jungian idea we will explore in a subsequent blog. One could say that the process of individuation occurs when the ego relates to the self without identifying with it. Identification with the self can produce a whole range of psychological and existential problems. It is also necessary to point out that individuation is a life-long endeavor that one can only approximate but never fully achieve. For Jung saw the ego’s ultimate goal as wholeness. The ego’s knowledge of the self, however incomplete, could be viewed as a kind of gnosis that teaches us to acknowledge the objectivity of the psyche.