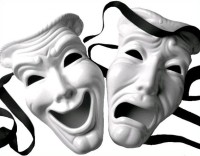 Another key idea in Jung’s psychology is the persona. In Latin, the term refers to the mask of an actor, and Jung viewed this word as a descriptor apropos of his concept. After all, social conventions and cultural demands require that we all don a mask from time to time and usually more often than not. Jung wrote that the “persona is thus a functional complex that comes into existence for reasons of adaptation or personal convenience” (1921/1971, CW6, para. 801). Jung further suggested that the “persona is exclusively concerned with the relation to objects” (1921/1971, CW6, para. 801). Jung’s articulation of the said concept provides us with a helpful start point to better understand what the persona means psychologically and how it works.

Let us review. The persona is a functional complex. In other words, the persona has a working purpose. Just as opposable thumbs have helped the human species adapt to the physical environment, the persona has ostensibly provided a psychic mechanism for the personality to function within and adapt to the world at large. It provides a psychic buffer between one’s individuality and the collectivity that surrounds the personality on all sides. It also helps us adapt to the world by providing a protective layer between the ego and the world of objects and things, whether these things are people, jobs, institutions, or socially constructed roles.

Also keep in mind that the ego has two faces, one that looks outward (e.g., persona) and one that looks inward (e.g., anima or animus). In this way, the persona corresponds to the objective exterior world as the anima/animus correspond to the subjective interior world. Jung similarly observed: “As to the character of the anima, my experience confirms the rule that it is, by and large, complementary to the character of the persona” (1921/1971, CW6, para. 804). The complementary relationship between persona and anima/animus is a very important distinction which is not, in my view, sufficiently discussed or explained in Jungian circles. 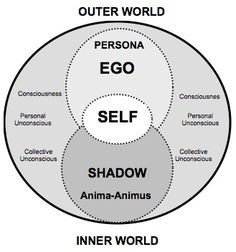 Elsewhere, Jung dedicated an entire section of an essay on the persona (1928, CW7, paras. 243-253), and presents the persona as an arbitrary segment of the collective psyche. Indeed, the persona is a segment or layer that buffers the ego from the world. There is no definite line that demarcates the boundaries between persona and ego and persona and world. Rather, these boundaries are psychically imposed and are in constant flux per the demands of the situation. A helpful illustration is taken from my own social identity. I am in the Army Reserves and once a month don my uniform and identity as a soldier. How I act and conduct myself while executing the duties of a solder is completely different from how I conduct myself while in the company of my family. One could say that out of necessity my military persona is far more regimented than my civilian persona. The aforementioned illustration is merely one example as there is a persona for practically every social situation. Naturally, every time I engage the cashier at the grocery story, I don a persona. So one could say that I often am not myself but a representative of the collective psyche, which Jung went on to explain:

When we analyse the persona we strip off the mask, and discover that what seemed to be individual is at bottom collective; in other words, that the persona was only a mask of the collective psyche. Fundamentally the persona is nothing real: it is a compromise between individual and society as to what a man should appear to be. He takes a name, earns a title, exercises a function, he is this or that. In a certain sense all this is real, yet in relation to the essential individuality of the person concerned it is only a secondary reality, a compromise formation, in making which others often have a greater share than he. The persona is a semblance, a two-dimensional reality, to give it a nickname. (1928, para. CW7, para. 246)

Above, Jung underscored another important point regarding the persona. The persona constitutes a relationship between one’s drive to become an individual (i.e., individuation) and external pressures to conform to collective norms. In this way, the persona could be viewed as a partial compromise between the desire to be a member of a group and the wish to be oneself. Both aspects of the personality are constantly at odds with one another which results in compensation between the societal demands and the contents of the collective unconscious. What subsequently emerges from these compensatory factors are collective fantasies, which manifest in social interactions, personal relationships, and dreams. The persona is neither good nor bad, it simply serves as a means of adaptation. The drawback is most people fail to distinguish between their persona and who they, at bottom, really are. The Western mind too often identifies with its masks rather than with the individual reality that lies behind them. This leads to merely a “provisional life”*, where one privileges the collective representation over the archetypal substrate from which it derives. It seems that this tendency characterizes the reigning paradigm of Western civilization. Perhaps as we advance into the twenty first century this will change. One can only hope.

* Daryl Sharp provides a succinct definition in his C.G. Jung Lexicon: “A term used to describe an attitude toward life that is more or less imaginary, not rooted in the here and now, commonly associated with puer psychology.” Over identification with the persona can exacerbate the conscious attitude associated with merely a provisional life.

By The Depth Coach in Life, Psychology, Uncategorized
2 Comments