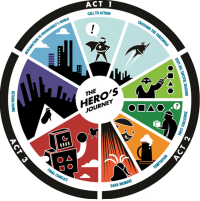 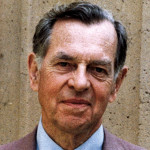 Because one of the corollary aims of depth coaching is to come to terms with one’s personal myth, it is helpful to explore the work of the mythologist Joseph Campbell (Figure 1) who introduced the idea of the monomyth (hero’s journey)—the universal template that appears in literature, myth, religion and psychological development. The myth of the hero is universal and can be found in every culture and at every juncture in human history, however obscure. One could say that the monomyth is as infinitely varied as the human species; and yet its archetypal representation remains the same, an incredibly diverse range of characteristics that originate from what the Swiss psychologist C.G. Jung (Figure 2) called the collective unconscious. In a tongue and cheek manner, the late American author Kurt Vonnegut satirized the monomyth as follows: “The hero gets into trouble. The hero gets out of trouble.” Campbell borrowed the term from James Joyce’s novel Finnegan’s Wake. 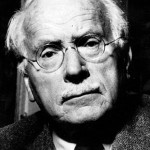 The monomyth traces the development of the archetypal hero or heroine and, according to Campbell, through three principal acts: Departure, Initiation, and Return. Each act is further broken down by seventeen stages. The stages represent key milestones within the journey of the hero or heroine, or put in psychological terms, the development of the ego. One could say that each stages is characteristic of a psychological condition or turning point. 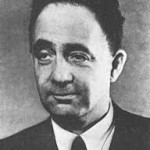 The depth psychological aspect of the monomyth should come as no surprise. Campbell relied heavily on both the theories of Jung and the Indologist Heinrich Zimmer (Figure 3) throughout the course of his long career. The monomyth ostensibly provides a template by which the average person can use to better understand his or her own life. One could say that at the core of the monomyth are the very archetypes that ostensibly structure the human condition. The monomyth aspires to throw light on the mystery of human experience by offering a universal narrative that most, if not all, people can relate to.

During the end of Jung’s life, he tried to tell his story in mythological terms, referring to his own personal myth:

Thus it is that I have now undertaken, in my eighty-third year, to tell my personal myth. I can only make direct statements, only “tell stories.” Whether or not the stories are “true” is not the problem. The only question is whether what I tell is my fable, my truth. (1961/1989, p. 3) 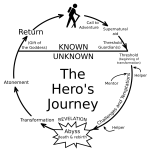 Looking back on his life, Jung saw an underlying narrative or myth that he thought his life was modeled after. A careful study of Jung’s biography suggests that the monomyth (Figure 4) played an important role in his life, especially after his break with Sigmund Freud in 1913. If Jung was able to apply the monomyth to his own life long psychological development, then we too should be able to do the same. Such an undertaking would be tantamount to a psychological road map tailored to the life of the individual. What one ultimately gains is a basic orientation to the archetypal patterns that underscore one’s life.

By The Depth Coach in Life, Personal Development, Psychology, Relationships, Uncategorized
No Comment