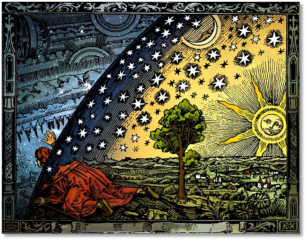 Active imagination is a technique or method devised by C.G. Jung, to engage, interpret, and integrate fantasy-images and other subliminal contents that arise from the unconscious. Jung originally referred to the method as spontaneous fantasy or non-directed thinking. Jung (1928) suggested that the method was “a question of releasing unconscious processes and letting them come into the conscious mind in the form of fantasies” (CW7, para. 342). In late 1913, Jung began to experiment with this process through visualization techniques. He imagined digging a hole and described this process of visualization in his Seminar on Analytical Psychology Given in 1925.
I devised such a boring method by fantasizing that I was digging a hole, and by accepting this fantasy as perfectly real. This is naturally somewhat difficult to do—to believe so thoroughly in a fantasy that it leads you into further fantasy, just as if you were digging a real hole and passing from one discovery to another. But when I began on the hole I worked and worked so hard that I knew something had to come of it—that fantasy had to produce, and lure out, other fantasies. (1989/2012, p. 51)

And that is exactly what happened. Jung’s initial attempt to bore his way into the unconscious led him down a rabbit hole of psychic images. In his autobiography, Jung (1961/1989) wrote that he let himself drop:

Suddenly it was as though the ground literally gave way at my feet, and I plunged down into dark depths. I could not fend off a feeling of panic. But then, abruptly, at not too great a depth, I landed on my feet in a soft, sticky mass. I felt great relief, although I was apparently in complete darkness. (p. 179)

What followed was a lengthy encounter with personified fantasy-images that would span the next three years. As he explored his own imagination he was met by two fantasy figures that themselves Elijah and Salome. They were accompanied by a third figure in the form of a large black snake that Jung described as a typical motif commonly found in hero myths. One can read in detail about Jung’s account of these figures in The Red Book. Jung (1961/1989) further wrote of those fantasies:

I had the feeling that I was in the land of the dead. The atmosphere was that of the other world. Near the steep slope of a rock I caught sight of two figures, an old man with a white beard and a beautiful young girl. I summoned up my courage and approached them as though they were real people, and listened attentively to what they told me. The old man explained that he was Elijah, and that gave me a shock. But the girl staggered me even more, for she called herself Salome! She was blind. What a strange couple: Salome and Elijah. But Elijah assured me that he and Salome had belonged together from all eternity, which completely astounded me… They had a black serpent living with them which displayed an unmistakable fondness for me. I stuck close to Elijah because he seemed to be the most reasonable of the three, and to have a clear intelligence. Of Salome was distinctly suspicious. Elijah and I had a long conversation which, however, I did not understand. (p. 181) 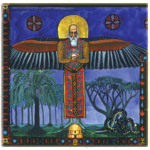 Another figure eventually arose from the unconscious that Jung called Philemon (Fig. 1). Jung wrote that Philemon symbolized superior insight and demonstrated psychic objectivity. Jung’s description above marked his first attempt at articulating the method he would later formulate into active imagination. However, as early as childhood, Jung had lucid hypnagogic experiences that were consistent with the characteristics of active imagination (1961/1989, p. 181). He first described his method of active imagination in his essay “The Transcendent Function,” which was not published until 1957. When he first wrote the essay Jung was still referring to active imagination as spontaneous fantasy. Jung (1916/1957) suggested that
The capacity to produce free fantasies can, however . . . be developed with practice. The training consists first of all in systematic exercises for eliminating critical attention, thus producing a vacuum in consciousness. This encourages the emergence of any fantasies that are lying in readiness. A prerequisite, of course, is that fantasies with a high libido-charge are actually lying ready. (CW8, para. 155)

Thus, Jung was putting active imaginations on par with dreams. The central difference between active imaginations and dreams is that the individual has greater control with the former because they are exercised during a waking state. Although often undervalued, active imagination is an effective tool that anybody can use to further assimilate and understand his or her own unconscious contents. Jung further pointed out that there were a number of ways that one could do active imagination depending on the individual and his or her own psychic constitution. For some people painting may serve as an adequate way to engage their unconscious whereas for others writing may work best. It really just depends on the person. Lastly, one of the most important features of active imaginations is the way they apparently demonstrate that psychic images can have a life of their own, which accords with Jung’s hypothesis of psychic objectivity.

By The Depth Coach in Design, Life, Psychology, Uncategorized
8 Comments